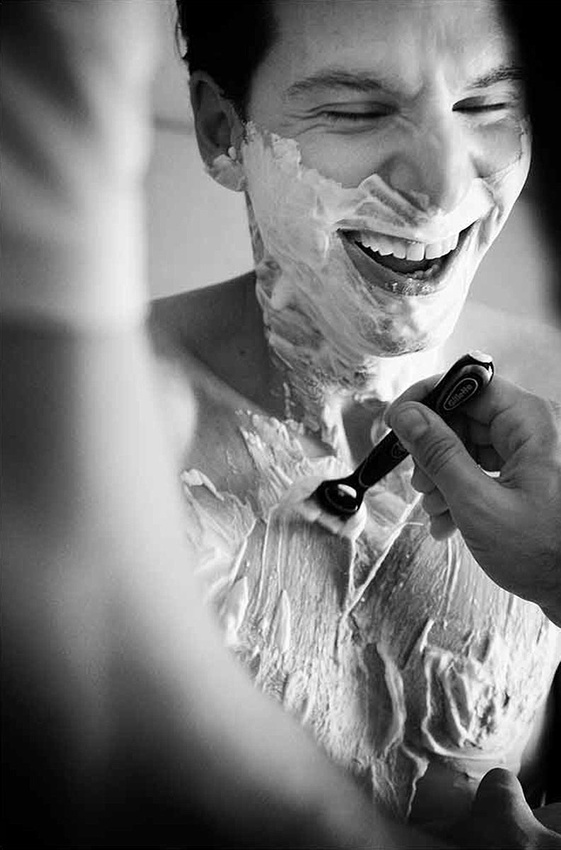 When a couple gets married in Greece, we usually visit both the bride and the groom, in order to capture some precious moments while they are getting prepared and before we all go to the Church.

One of the funniest Greek wedding traditions, is what is called ‘’shaving the groom’’.

During that little ‘’ceremony’’ the groom’s closest male friends, gather around him and give him a shave, that may be ‘’virtual’’ or – at times – real…!

Sometimes though, they do much more than that, as they spread shaving foam on his hair and on his chest, pretending that they will shave them too…!

I have even witnessed a traditional wedding, in a small village in the countryside, when the groom’s cousin, used a real sharp axe to shave a – small – part of his beard.

The whole thing was scary in a funny way, and funny in a scary way…!

Thankfully the groom survived to tell the tale and did get married to his loved one and they did live happily ever after.

In the instance of the above portrait, the groom, that was Italian and got married to a Greek girl, had lots of fun, and the ‘’shaving’’ was painless, as it was ‘’performed’’ with plastic cap on the razor…!

I used a medium telephoto lens, to shot from a distance keeping myself out of the ‘’line of fire’’…!